This is the fourth installment about my week long tour for TD Canadian Children's Book Week 2013. I toured in northern Saskatchewan. More on the whole idea/background of Book Week here. Catch up on: installment one, or maybe installment two, or even number three.

I was packing the car in the morning when in the grass beyond the parking lot I caught sight of this little guy (or gal). When I posted it on my Facebook page I was told it was indeed a gopher, otherwise known as a Richardson’s ground squirrel. A first for me!

I didn't have to go far this morning. My first school was Queen Mary Community School. The library had a great old fashioned tub full of pillows in it. I thought that was cool. It was a very large audience but they were wonderful. Lots of kids volunteered to be Mr Fox. An hour went by very quickly. And at the end of my presentation many of the younger children came up and hugged me and thanked me for coming. The teachers gave me a nice gift. I’m proud to now own a bright blue book bag with the school’s logo on it.
Today's lunch was a treat. Jane Parrott took me to Amy’s on Second restaurant where I had a lovely big bowl of Italian chicken soup. Excellent! So go there if you’re ever in Prince Albert. After that it was pretty much just down the street to the second school.
Westview Community School had a couple pigeons perched on the roof watching me approach. (:>) As I waited for the teacher to meet me, because it was lunch recess I listened and watched kids practicing hoop dancing in the gym. That was amazing! The drums were so powerful and the girls graceful. In Ms Radke's classroom I sat in a wooden rocking chair and shared my books with the classes. Here's the beautiful envelope for the card they gave me.

Then it was off to find North Battleford via Saskatoon. It was a three hour drive with rather a lot of excitement at one point:


And then when I was near Radisson...

This flooding was very scary. That transport in front of me was kicking up some serious waves. I took it slow. At one point the car hesitated for a moment and I think my heart stopped thinking it was going to stall, but I made it through. That was a lot of water.

You can read/watch a video about the flooding here on the Saskatoon CTV news: http://saskatoon.ctvnews.ca/highway-16-under-water-1.1272194
I was so done by the time I found the motel. Good night Battlefords. 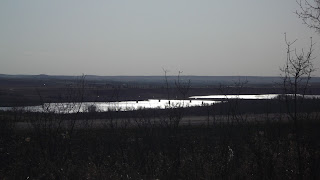 Email ThisBlogThis!Share to TwitterShare to FacebookShare to Pinterest
Labels: Book Week 2013, Out and About with Author Hat On, Transportation tales

Did you know Lucy Maud Montgomery lived in Prince Albert for about a year? I hope to get there some time!
Yikes that flooding looks scary.

I didn't know that about her. That's cool. You know I'm an Anne fan. :> A belated happy first day of summer to you too.

Please feel free to leave your perspective on my perspective, and thanks for stopping in!

Contact me
Disclaimer: The views expressed here are my own, and not necessarily those of the SCBWI.

If You Love Books, Look Into

Promote Your Page Too